2014 Mac mini tear down and benchmarks.

723 days is a long time. That amount of time without news/updates can make anyone start to hallucinate. Phil Schiller pulled an ‘one more thing’ by ending Apple’s new hardware announcements October with the words “we have one other small update today”. For a brief moment the stars aligned and the heavens sang. We have a new Mac mini.

To take a quick look back, the Mac mini was once described as Apple’s most popular server. In Apple’s October 23, 2012 announcement Phil talked about how easy the mini was to open and they showed off its internals. The Mac mini received a small power bump and USB3 ports. Models tiers and configurations stayed as they have been for many years. This model sold for the next 723 days.

Fast forward to 2014, Phil referred to the all new Mac mini as a great starter/first Mac. He also said the phrase “perhaps you’ve already added one to your home or network”. He quickly mentioned a list of improvements and that was it.

This shift in language and differences between the 2012 and 2014 announcements match up with the hardware changes. Less than two months after the 2012 Mac mini was released, we posted a thought experiment on where the Mac mini hardware may have been headed. This was before the 2013 Mac Pro was announced, and we had concerning thoughts of where the mini was headed. Little did we know how prophetic that post would be.

The first thing we noticed following the October 2014 announcement was that there was no Mac mini model with the ‘Server’ suffix. As you can tell, this is not going to be business as usual. Let’s start with the positives. The improvements to the Mac mini are:

The 2010 through 2012 Mac mini models were very user friendly. The only tools required to swap out memory were two thumbs. The entire machine would come apart with two sized torx screwdrivers and a special logic board removal tool. There were two hard drive bays from 2011 forward and the memory could be upgraded easily by anyone.

From the outside, the new Mac mini (Late-2014 Macmini7,1) looks very similar. It’s missing a firewire 800 port and adds a second Thunderbolt port. Other than that it’s fairly inconspicuous. The fun stops right about when you realize to open this model you need to get past the (6) tamper-proof (TR6) screws. From there we notice we’re down to a single SATA interface. Yes, you can run two internal storage devices. However those PCIe flash storage sticks are costly and we never recommend running a Fusion setup (CoreStorage LVM across both disks). The best way would be to run them as separate storage devices. The hard drive bay could be upgraded to a 2.5” SATA SSD drive. Something is missing though. Removing the logic board reveals the new hiding spot for the RAM. It’s soldered onto the top of the logic board.

Stop. Breathe. It’s ok, we’ll get through this together. This Mac mini seems to be a transitional model. If they had reduced the physical size of the power supply Apple would have had the exact Mac mini that we predicted. If Apple releases new minis next year based on Broadwell/Skylake microarchitecture, we’ll see that performance jump everyone was hoping for. Today’s new Mac mini is still a solid option for us. The major consideration is to buy the Mac mini you want upfront, as upgrading the memory is physically impossible.

Today we have some new processors and graphics power, this *should* be good. Let’s look at the benchmarks on the base models for the last three generations. (We’ll be running benchmarks of the i7 variations soon, but we already know they are going to be low.) We started with a base model Mac mini with a fresh install of OS X 10.10 Yosemite. The 2014 Mac mini ships with the same build of Yosemite as the general release (14A389). All benchmarks were ran today. Below is the Mid-2011 (Macmini5,1), Late-2012 (Macmini6,1), and the Late-2014 (Macmini7,1). As you can see on the new Mac mini, the single-core performance is greater, multi-core is in between the 5,1 and 6,1 models. 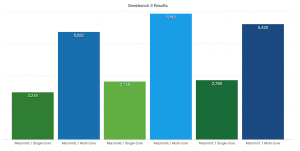 Just a reminder – until the end of October we are running a promo for 50% off colocation for the first 5 months when promo code 50off5 is used.